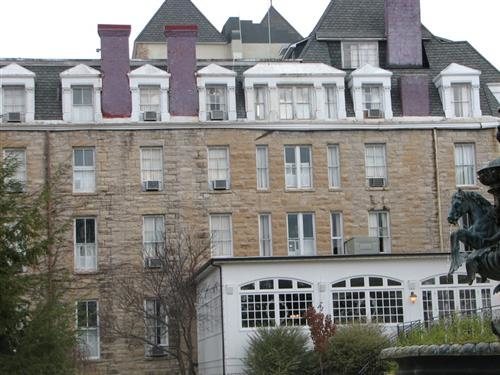 The site of a former hospital, the Crescent Hotel is known to be quite haunted. It was run by a conartist when it operated as a hospital, and he had previously been convicted of practicing medicine without a license, promising the cure for cancer. There were a number of deaths at the hospital, so many that the hospital had its very own morgue in the basement, which is now a tourist attraction, sharing space with the hotel's day spa. Many believe the ghosts spotted here date back to its hospital days, and from its construction and time as a girls' school. One of the most haunted rooms of the hotel is said to be Room #218, where a former construction worker died after falling and hitting his head on a stone lintel. Room #419 also has quite a bit of paranormal activity, haunted by a female ghost who was nicknamed Theodora. Rooms #202 and #424 are also suspected to be haunted. Apparitions have been seen routinely walking the halls, especially that of nurses pushing people in wheelchairs. The hotel offers ghost tours for those who are interested in taking a look for themselves!

Share Your Experience or Comments - Crescent Hotel
Get More Info

Disclaimer: Arkansas Haunted Houses does not endorse or support trespassing to visit real haunts. Before you visit ANY local real haunt, make sure to acquire the appropriate permits and/or permissions, and be respectful of privately owned properties. Countless Haunt Hunters have been arrested, ticketed, and reprimanded by the authorities for trespassing. To avoid this, be sure to get in touch with the property owners before visiting a haunt, and respect their hours of operation, local regulations, and rules for visiting at all times. Happy haunting!
All information on this page was submitted to Arkansas Haunted Houses and was believed to be accurate at the time it was posted. Please report any inaccuracies here.